—Written by Evan Guyett, photos by Evan and Jeff, and web page by Jeff Nisley—

The first time I saw an F1D, I was flying penny planes in the Beatrice, NE auditorium, and Mark Bennett pulled out an F1D for a demonstration. The first thing I said to myself was “I will never be able to build something like that.” How funny is it that F1D is pretty much all I fly now!

F1D is a particular type of indoor free flight model aircraft. A very good explanation of what Indoor Free flight models are about in general and additional information concerning F1D models can be found on the Wikipedia website under Free Flight (Model Aircraft). Scroll down the page until the heading “Indoors”. This is where you will find a fascinating article on this indoor hobby.

There is a lot that goes into the construction of competitive F1D’s. The first thing is gathering all the materials. To build an F1D, you must use very precise and high-grade balsa wood to keep the aircraft to the minimum weight requirement. All of my wood I get comes from a cutter in England by the name of Nick Aikman. He has the best balsa wood anywhere, and sells wood sheets down to 0.005” thick. That’s almost the thickness of standard paper! Other materials include OS film, boron filaments, wire, etc.


To get the weight down on F1D’s, we use rolled motor tubes with thin balsa 0.013” thick. It’s hard to believe a thin tube will support the load from a wound rubber motor, but it won’t if it’s not built correctly. In addition to the tube, the boron filaments are glued to the top, bottom, and sides of the stick to give added strength, mainly in compression to keep the sticks from buckling. Another element to make a strong motorstick is a bracing post and bracing wire to keep the stick from bending too much. Without the bracing post and wire, too much bending causes the motorstick to buckle.

Wings and stabs are built very similar to other indoor models, just on a much lighter scale. The wings also use boron filaments to make the spars stiffer. I often have to be quite careful when building a stabilizer, because they must be very light and very stiff, which often takes a lot of wood testing.

One of the most interesting things I find about F1D construction is the detail and precision of propeller construction. They say the most important part of the plane is the prop, and F1D is no exception. The props are built similar to the wings, but the 3D complication means we have to build them on prop blocks with the correct pitch. The prop spars are sanded carefully to ensure equal deflection so that under high torque the model doesn’t wobble. The ribs are carefully glued in place to hold the pitch that has been designed for the propellers. The blade shape and size is often a huge factor of performance, and a simple addition of 1/8” to the blade chord length can change everything. 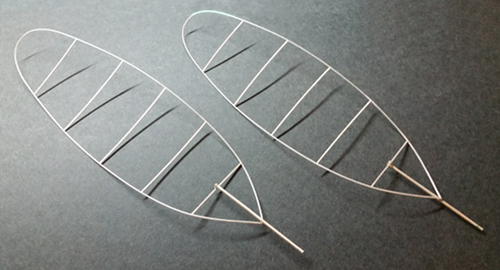 The new trend in F1D is to build propellers without spars, meaning all of the structural stiffness must come from the blade outline itself. To do this there are two established techniques: carbon fiber blades or balsa-boron blades. I have worked a lot on balsa-boron blades and have refined my techniques a lot over the past year or two. It is said that there is a 3% efficiency gain in the spar-less propellers, but there is still debate as to whether the efficiency gain is due to the drag from the spar or rather that the spar-less propellers retain the blade shape better under flight loads. All I know is that they are a pain to build but really look cool and fly well when finished!

To make F1D’s more efficient, the best way to use all the rubber motor energy is through a variable pitch propeller. These propellers have the highest pitch at the start of the flight with the highest motor torque, and as the torque goes down, the blades will “close” to a lower pitch and increase in RPM. Fine tuning these propellers are how the really long flights are achieved.

These props are tuned by three screws: high pitch, preload, and low pitch. The high pitch screw adjusts the limit to the highest pitch the propeller will be at the beginning of flight, and this controls the altitude the model will rise to and the rpm. The preload screw adjusts when the blade begins to shift and for how long by changing the torque on the spring. The low pitch screw limits how low the pitch will go. Often with vp props, rpm’s during climb can be as low as 35 and during descent be as high as 50!

At right is a Traditional Front Bearing shown with a sparred propeller, from a photograph taken in 2017.

To really learn how to fly F1D it takes a lot of practice and an efficient method to fly the models. A good winder with a counter and a good torque meter are all very important tools needed to fly. Also a good flight log and good note-taking habits are very important.

When flying, you must wind the motors precisely, patiently and especially in contest situations—quickly. We use a stooge setup so that the motors are wound separately away from the model. The winder sits in a slot and is held in place on the carrying case while winding.  Once the motor is wound, you are able to hook up the motor to the front and back of the model without any troubles. This makes it very easy to transfer the motor from the stooge to the model quickly. Once that is done, the model is ready to go!

Once the plane is released, the entire flight time is spent checking altitude, trim, prop rpm, etc. Detailed records of this data can help make future decisions, and learn how your aircraft flies.

Here’s a neat trick for modelers that have planes with relatively slow moving props to find the RPM or revolutions per minute of the prop. Take a stopwatch and time how long it takes for the prop to complete 5 rotations. Now take this time and divide by 300. The result is the RPM. This is a neat trick for tuning the variable pitch propellers among other things.

Due to the distances we go to compete, making the F1D’s portable is a challenge within itself. To do this, we make model boxes that are sturdy, but also fit within airline regulation carry-on sizes to go on planes without the threat of damage that checked bags have.

Typically for competition, I bring 4 planes, and 8 propellers. This gives me the flexibility to try different models, and have backups in case of damage. Building a strong, light box was a challenge in itself. The box must carry the planes, but also act as the stooge for the winder and torque meter, allowing the modeler to take the stooge with the fully wound motor out to the position the model will be launched from. This reduces the risk of a motor exploding on the model with the time it takes to walk out to the launch spot from the table.

I really enjoy flying F1D, and even after dabbling into RC planes, aerospace engineering classes and more, it is still mysterious how these models fly, and is truly a unique challenge.

Evans interest in indoor flying began when he first attended a Science Olympiad event back in 2013.

In August of 2013, Larry Coslick wrote:
“Can you believe it; Evan has only been building indoor models since March of this year and has won a place on the three man Junior F1D World Championship team. The F1D World Championships will be held in the salt mines at Slanic, Romania in the spring of 2014.”

As it turns out—Evan along with his team mate Royce Chung won the Junior F1D World Championship in 2014.

Evan is currently working towards his Engineering Degree attending the Missouri University of Science and Technology at Rolla, MO.

A big thanks to Even for his work writing this article with his extraordinarily thorough explanations of what F1Ds are all about. We wish him luck in all future competitions.

Below is a Gallery of photos taken during  Evan’s award winning trip.

Click on the first picture of the Gallery below and it will take you to a Slide Show.
Use the “Esc” or “Escape Key” on your keyboard to return to the web page.

Below is a Slide Show featuring Evan. Click the first photo to go to a Slide Show. Use the Esc key on your keyboard to exit the Slide Show. 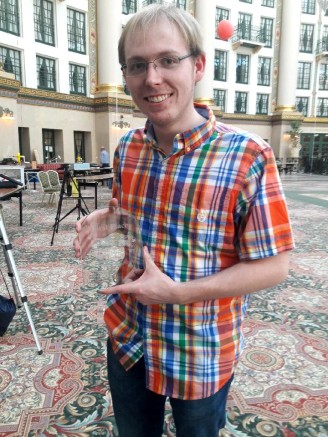 Jeff Nisley is the webmaster of the website Flyhaffa.com and would like to hear from you if you have any comments or suggestions at jeffnisley@ymail.com. Thanks.

If you liked this “HAFFA Member of the Month”, Here is a List of Other Member’s Web Pages: