Here we present an article published originally in the February 15, 1996 Kansas City Star, written by Lewis Diuguid. We are republishing it here because it seems just as relevant today as when it was written.

The gymnasium at the Ozanam Home for Boys seemed too quiet to have Heart of America Free Flight Association airplanes buzzing about inside.

But I was expecting noisy, gasoline-powered engines on remote controlled aircraft. Instead I found guys of all ages trailing rubber-band powered, featherweight planes like excited kids chasing butterflies.

It was a surreal sight but strangely peaceful and relaxing. That feeling fits what the guys get out of building the planes from kits or from scratch and sending them on silent flights indoors. “We’d love to get into a place like Kemper Arena to fly but the rent’s too high,” said Jack Koehlar, association president. The men formed the club in 1987 because of the love to build and fly the planes, which weigh 0.8 gram with a wingspan of a few inches, to 16 grams with a wingspan of 16 inches.

The guys get a kick from sharing their hobby with the boys at Ozanam, a treatment center for children with emotional problems.

“Most of the kids have never done anything like this before,” said William Sapp, Ozanam recreation therapist. “They just love it.”

Members of the Heart of America Studebaker Drivers Club watched from the sidelines.

“The adults working with the young fellows is such a fabulous contribution,” Jo Maxwell said. “You could easily say more people need to do things like this.”

Her husband, Ken Maxwell added, “The thing I like about it is that it gives the kids something that they can do with their hands and accomplish something.”

Two planes circled silently in the gym. No strings guided them, and no remote control boxes steered their flight.

“It’s no big deal. you just fix them.” said Emil Schutzel as he repaired his aircraft.

Some got caught in the rafters. That’s when the aircraft owner used a long pole, something like a fishing rod, to get them down.

Koehlar delicately got his plane back.

Then I asked the dumb question: Why do you do it? The men put their own spins on my question.

“Why do people go to football games?” Koehlar asked.

“Why do you form any club?—to share common interests and to to reach common goals.” said Mike Basta, past vice president of the Heart of America Free Flight Association. Basta builds and flies the $3 to $20 planes, he said, because it helps him unwind after work.

Koehlar said: “We enjoy it. It’s kind of different. We don’t know whether to call it a craft or a sport.” 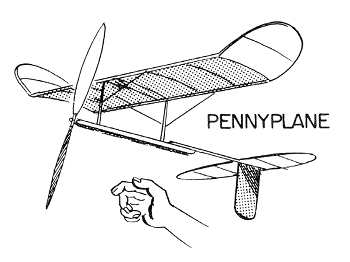 Part of the kick is to try to beat each other’s flight in regard to time—not distance, said Basta who wore a stopwatch around his neck. The group’s indoor times ranged from 1 to 8 minutes. One plane flew 55 minutes. “None of our members are quite up to that yet.” Basta said.

Schutzel added, “Everyone here will help you to beat the other guy.”

Mike Porter said, “It’s kind of neat to see something stay up in the air so long.”

Many of the guys said their dads got them started in the hobby and like wind-up propellers, they have kept the experience going.

“When were were kids we didn’t have video games.” Koehlar said.”

“We needed something to occupy time with little expense.” Schroeder remarked.

“It was the thing to do. “Koehlar added.

I can see why it still is.

— HEY VISITORS! — SEARCH
for ANY TOPIC or SUBJECT MATTER
THAT INTERESTS YOU by Typing in
ONE (1) or TWO (2) "KEY WORDS."